29 Missing: The True and Tragic Story of the Disappearance of the SS Edmund Fitzgerald Add to wishlist

A Read Michigan Notable Book for Young Adults
On November 10, 1975, SS Edmund Fitzgerald, a giant freighter, sank with its entire crew of 29 aboard, in one of the most violent storms ever witnessed on Lake Superior. In 29 Missing, Kantar tells the Fitz‘s story from the christening in 1958 as the largest ship on the Great Lakes to the expedition in 1995 to recover the ship’s bell in what proved to be a moving memorial to the lost crew. Using information from government investigative reports, the book provides a dramatic hour-by-hour account of what transpired during that terrible voyage, including dialogue from actual radio transmissions between the Fitzgerald and the Arthur Anderson, the freighter following the Fitz.

This passionate retelling of the story is complemented by historical photographs and a map depicting the final journey. Designed primarily for young adults but enjoyed by all ages, 29 Missing provides the facts leading up to the disappearance, detailing the subsequent expeditions to the wreck site as well as the leading theories about the sinking that have been debated by maritime experts.

Be the first to review “29 Missing: The True and Tragic Story of the Disappearance of the SS Edmund Fitzgerald” Cancel reply 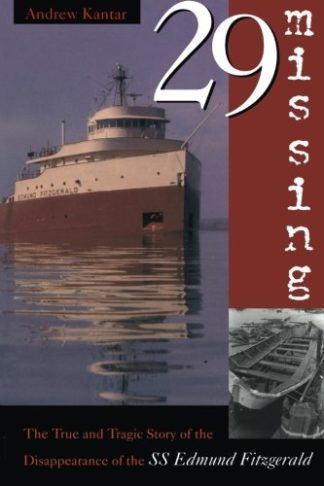