Standing alongside J. P. Morgan, Andrew Carnegie, and John D. Rockefeller, Charles Tyson Yerkes (1837-1905) was one of the most colorful and controversial public figures in nineteenth-century America. Robber Baron is the first biography of the streetcar magnate who was the mastermind behind Chicago’s Loop Elevated and the London Underground and namesake of the University of Chicago’s observatory. Yerkes also served as the inspiration for Frank Cowperwood, the ruthless protagonist of Theodore Dreiser’s Trilogy of Desire: The Financier, The Titan, and The Stoic. Despite various philanthropic efforts, Yerkes and his unscrupulous tactics were despised by the press and public, and he left Chicago a bitter man.

John Franch has drawn upon every available source to tell the complete story of a man desperate to leave a lasting impression on his world. While Yerkes’s enduring public works testify to his success, Robber Baron uncovers the cost of this boundless ambition.

Be the first to review “Robber Baron: The Life of Charles Tyson Yerkes” Cancel reply 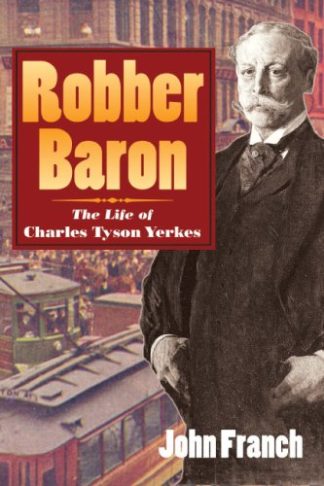